What should governments do to help those that lose their jobs to automation?

As we forge forward toward a post-scarcity world, It is likely as a result of technological advances that many will be displaced from their jobs. Whereas in the past automation has created more jobs than it replaced, moving forward this will unlikely be the case.

Therefore we need to find a solution to the problem of how does one sustain an exponentially growing unemployed population?

One answer could be to create a universal payment scheme such as the Universal Basic Income (UBI) currently being piloted in cities around the world. A periodic cash payment unconditionally delivered to all on an individual basis, without means test or work requirement, enough to afford the recipient to cover their basic cost of living.

Many governments are seriously considering this approach and it has opened the debate to what exactly one would do with one’s times should one find themselves in the position where they didn’t have to work at all? 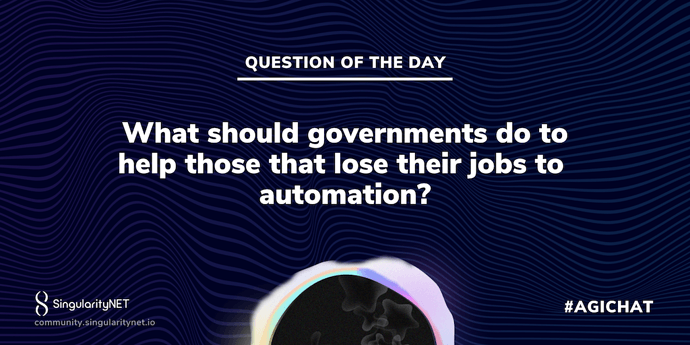 At this stage as there is a lack of employees everywhere and a huge demand that will grow for some time… governments should invest in retraining and education. We need nurses, plumbers, etc. and these jobs are not that difficult for humans, still very hard to automate and most people displaced by automation will manage to learn how to do it.

In longer term, when we have true AGI and most people are really out of jobs and unemployable, we might need UBI.

I think we should introduce some sort of robot / automation tax. Such a tax can be calculated based on the level of automation (eg a ratio between revenues and wage costs or something like it). UBI would be paid from automation tax returns.

This could mean we can introduce UBI right now. The UBI would be very low now (can be eg. 50EUR only) but would grow slowly every year as businesses get more and more automated. It needs to be calculated in a way that in 100% unemployment it is high enough to support 100% of population with nice enough UBI at that time.

The wealth created by AI and robots would be distributed fairly to those who helped create it.

i think people who do not have employment will need programs that will give them reason to get out of the home and doing things to keep a healthy routine and stop them from becoming addicted to sedentary activities.

Actually I wrote an article about this same worry: I advocate for both a Universal Basic Income and Universal Basic Housing. Such housing should be pursued through direct action and reclaiming land lost by mega-companies, make shifting old abandoned warehouses into apartments for the needy, ran horizontally and without landlords.

The UBI can be used to purchase robot parts and AI software.

That’s a simplification of the article, but that’s the main jist.

Use Tokenegineering to adapt a universal basic insurance scheme with an organic global footprint…
Universally prioritised with Augmented Intelligence to act Global and Think Local.
How? Decentralized AGI on the Commons. A Co-op not corp foundation.
Building trust by empowerment not hand-outs.

We live in a finite world. We, humankind, have vastly overshoot the carrying capacity of the planet. As our finite endowment of fossil fuels comes to an end the number of humans will decrease by a factor of 100 (wild guess). Then we can worry about the niceties of full employment in the face of AI.

If we believe in a common good that includes all humans we will provide for all. If on the other hand, the current belief system of the US, we only value ownership then we will let all who are not significant owners die.

Well there is people that lose their jobs do to automation, but there are also people who can’t get a job do to mental issues that keep them from being able to work a normal job as well.

Long story short, I feel like some universal basic income would be good. When I still associated with Breadtube, they sometimes referenced Universal Basic Services. I feel like I can’t be 100% behind UBS unless there was some anonymizing factor that made it not easily hijackable.

Ex. An extremely bigoted person that decided one day to discontinue the essential service for specific demographics.

There are some people where they just … operate differently, and don’t tend thrive in an overly competetive evironment, but they can work on such systems of automation, and even bug test systems as well.