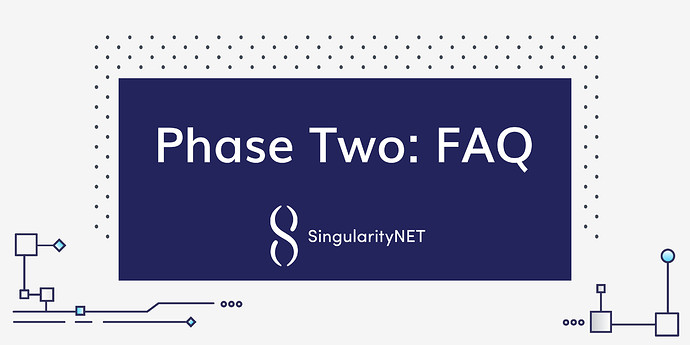 The SingularityNET Foundation is currently shifting gears from the early phase of its growth cycle, focused on building software, essential partnerships and establishing brand reach, to what is being conceived as Phase Two of the project’s development.

The following is a breakdown of some of the most pertinent questions asked surrounding SingularityNET Phase Two.

There are aspects of the SingularityNET Phase Two plan (specifically the launching of new AGI-ADA tokens that would expand the total token supply beyond the current 1 billion AGI tokens) that will require a token-holder vote for enaction – The proposal will be put to a vote during the period Feb 3-5 2021 and is linked here.

Q: why not just essentially “fork” the current tokens with a phased release over the next 5 years giving each token holder the new AGI-ADA tokens in proportion to their holdings at a defined block (snapshot) to be taken before the new tokens are minted. At least this way you won’t be diluting the token holding of all your supporters. I have held AGI since the token generation event, and will abandon my support of the project if the foundation rams through the creation of 1 billion new tokens out of thin air.

It seems pretty straightforward, the foundation wants to increase its relative holding of the tokens from 5% to 27.5% because they need the money. Starving them of said money jeopardizes the project writ large. What they’re not explicitly saying is that the project is plausibly jeopardized financially at present, drive down the value of the tokens and the consequent cost of using AGI services and there’s greater scope for mass adoption thus facilitating latent financial thriving i.e. 5 years later then present

Just in case I came across as negative, I am in favour of the proposal. Being tightly coupled with Cardano a few months before it issues the smart contract utility is undoubtedly a smart move regarding valuation of AGI tokens particularly given the gradual release of newly minted instances across this time.

Having founded several startups, this situation is a common problem. When raising additional capital, there are those that only think about the dilution of their shares rather than the worth of the shares if the funding round results in significant growth. As I used to tell my co-founders, would you rather have 10% of a 100 million dollar company or 100% of a defunct company? Any growth greater than double is a win, and it’s pretty clear that the founder is not confident of success at the projected rate of development without additional funds. Better to have 50% of something than 100% of nothing.

That’s not to say all fund raising is good, it’s not. Sometimes growth can happen without it at a slower pace and that is a good plan. But if the funds are raised for the correct reasons, and a solid plan in place to utilize them, it can be the difference between success and failure.

It looks to me like there are solid reasons, and a good plan for the funds. There’s no doubt in my mind that speed to market is important in this space given the resources of the competition.

I intend to vote affirmative.

Some very fundamental questions for anyone asking for more money:

1 - If my ERC-20 AGI tokens are locked into the staking pool can I use them to vote from 3rd Feb to 7th Feb 2021 or does this mean I will need to un-stake my tokens held in the pool just to vote and then need to re-stake them ? and does the voting come at Eth gas cost ?

2 - if my ERC-20 AGI Tokens are locked into the staking pool will I receive the Loyalty Rewards to be allotted to Phase One AGI token holders during the first year of Phase Two or would my tokens need to be in my own wallet ?

The existing ERC-20 AGI staking pool reward is 100,000 tokens per month and the new proposed AGI-ADA Staking Rewards Pool will be 500,000 tokens per month, for a total of 30 million… will this give a situation that could arise in which people staking the ERC-20 AGI at present all jump ship to stake with the new AGI-ADA Token as the rewards are 5x more or could the two staking pools be linked in some way to reward the same on each pool ?

I have had a full read of the Voting Proposal Summary Document and if one was only in this for token profits on a short term gain I could see how this 1 billion more tokens could upset some people but I for one am a long term thinker and investor on this project and the gains from going with Cardano, the new business plan and the 5 year plan to slowly let the new tokens into the market should give a positive result for sure …

I plan to to vote YES … This project needs this, think of the bigger picture people and not just money profits now ! that will come later to them that wait for sure…

support and vest now with a YES Voting Proposal vote my friends.

Great to see the engagement here and on the Telegram group. Do remember Ben is going to be doing an AMA on 1st Feb (or early morning 2nd in some time zones) and is often on Telegram; Tim is doing a sterling job there also and will be happy to help. There’s plenty to read, but if you’ve still got questions, get in touch. Don’t be shy.