How can we help design roles and organisations that make the most of people?

It isn’t just the workers that need to change their view of work, but also organisations must embrace the changing employment environment and take advantage of emerging technologies to operate both efficiently and effectively.

Part or fully decentralisation workforces are giving organisations the means to access the exact skills necessary to realise business goals and visions. It is possible for a business to be entirely decentralised where there is no corporate head and the direction the business goes decided by the workers and/or the consumers.

Businesses operating in this way could offer a far more fluid approach to work, allowing people to find what they want to do and offering rewards for doing that. Upwork, for example, could, in theory, sustain a company with no permanent employees at all.

Therefore today on #AGICHAT we ask ‘How can we help design roles and organisations that make the most of people?’ 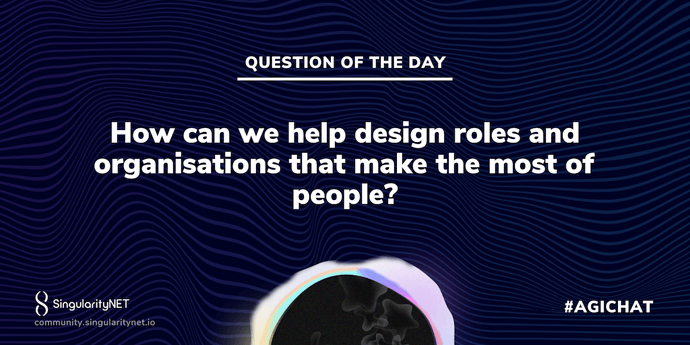 Interesting question, I’ll give it a shot…Create a directory of people with skills or machines to make things that the AI can make transactions with when people want to utilize AI services to create a product or whatever. Artisans, Machines Shops, Fabrication Shops, printing companies and probably a lot more. Maybe partner with a crypto project like syncfab? Then you get into the same for logistics… I think we’re just scratching the surface here when you consider utilizing people’s skill sets into part of an AI economy. Thanks for asking question #7.

Imagine if we could delegate trust to mathematical systems

Seriously though, designing new roles and organisations that make the most of people is a perennial question that can’t be answered without ignoring too many variables

So instead I would offer a general approach…we should subsidise humans that want to go back to university and learn new skills. Roles and organisation will be shaped by educated individuals

I am not even sure why we would need to worry about it as much to be honest. What you usually see is people are starting new startups, and these startups all have their own fluid job descriptions (for example, a developer that also writes blogs), and similarly, in the future surely these jobs will also sort of emerge by themselves. We always had the introduction of new job titles and it was not a problem before. So I am not sure if we need to design roles, I do think we need to redesign education. These days people are just memorizing whatever is served to them, but they don’t learn the skills to learn themselves new things.

It widely understood how to assemble and motivate effective teams. You carefully recruit people with talent and experience. You give them clear direction, objectives and the support they need. You give them a voice. You give them purpose, encouragement and a sense of community. You offer leadership and the chance to grow.

Roles aren’t designed. Roles are defined. It’s gotta be clear to everyone who is responsible for what. And who answers to who. Smart organizations make the most of people by assembling teams of experienced individuals with well-defined complementary roles, clear objectives and direction.

As a former “volunteer” I currently perceive Snet as an opaque, cliquey, political organization where people have poorly-defined roles and responsibilities. That’s my perception only. Does anyone else feel this way?

Who are all these people listed as team? What is their level of engagement? What is an employee? What is a volunteer? What is the implication of being a tokenholder?

One minute someone is a “volunteer community member” next they are an “employee”. How does this upgrade occur? Lack of transparency encourages gossip, rumor and politics.

Some volunteers have the authority to reward other volunteers with AGI. How does that work?

Then there are tokenholders. I won’t bring up the S word as there’s a lot of understandable angst about what ownership legally implies. But doesn’t long term substantial tokenholding suggest loyalty and commitment? So what does that mean for role and responsibility?

As a tokenholder I want to look after my interests. Working as a volunteer seemed a logical way to do that. But in my experience Snet volunteers are offered little meaningful strategic direction or understanding of objectives. What’s the path for their involvement and development?

Maybe we need activist tokenholders? A union of tokenholders to champion the rights of minority holders? These are questions to ponder.

It’s early days for this venture. It’s a strange new beast in scope and structure.

I am consistently impressed by many aspects of the organization in operational terms. Other aspects less so.

Who am I to say? Well I’ve worked as a C-suite consultant to over 100 organizations of every size and shape. From top academic institutions to multinationals, startups, government, and everything inbetween. I’ve even seen inside cults.

I’ve heard from the horse’s mouth about the problems organizations have keeping their shit together. I’ve had a ringside seat at how they solve those problems and thrive.

For me the Snet story is hugely intriguing and an ongoing source of fascination. I’ve personally got a lot of value from involvement.

Whether Snet can mature into a truly effective force remains to be seen. It’s encouraging to see a question of the day that’s apparently relevant to near term goals.

It appears crucial for Snet to win at the recruitment game. Perhaps the answers to this question should inform a tightly focused, ongoing recruitment drive aimed at attracting the best emerging talent in the hotly contested AI field. Involving recruitment agencies in this process looks risky.

How about something like this for a more hardball question of the day: Can an organization explicitly dedicated to transparency, inclusiveness and democracy achieve credibility by operating in a secretive, opaque, non-inclusive way?

I don’t think Snet is “secretive and opaque”. Really quite the contrary, maybe even at the expense of its future success, i.e. it isn’t clear that democracy conduces to commercial success; and neither does a political orientation (which I agree, Snet def has and which, for my part, I appreciate.)

But you raise a number of important points, and I think that practical orientation is critical, so maybe they could hire you as a consultant? I’d like to see it succeed. I also thought that Nathaniel Popper article in the NYTimes was pretty good.